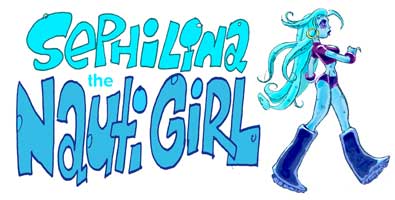 Originally from the planet SQUOID, SEPHILINA the Nauti Girl now makes her home in San-Fiasco, and is another agent from "The Company". Her missions tend to take her into outer-space.

The adventures of SEPHILINA take place out in the spaces between places that gives "SPACE" it's name. It's a cartoon science-fiction world brimming with weird robots and kooky aliens. 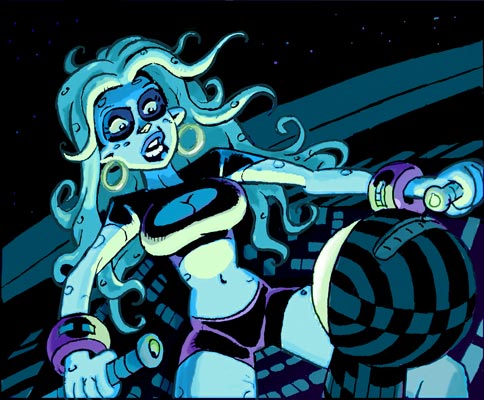 In fact Sephilina herself is an alien invertebrate from the planet SQUOID, and one of the ugliest species in the known universe. (SEPHILINA's first human boyfriend is still in therapy after catching a glimpse of her natural form first thing in the morning).

Thankfully, being an inverterbrate means SEPHI can shift into any shape that she likes, so out of deference to the queasiness of human stomachs, you see her here in the form that she takes when in the presence of humans: she appears to us as a cute-ish blue girl with tentacle dreadlocks. Sephi flies from adventure to adventure in SHELLI, her symbiotic Bio-ship, who tries very hard to keep Sephi out of trouble.

Unfortunately for Shelli sometimes Sephi's temper makes that difficult. Fortunately for the audience that's usually when the fun begins!

She is sometimes visited in San-Fiasco by her brother, who doesn't speak English, and tends to get her into trouble.

Sephilina first appeared in a page of my Nerve Bomb #0 comic in 2001, but at that time she was called SQUID GIRL. I started working on her own storyline which came out in 2002 in Nerve Bomb #0.1. Then, I found out that the 'Squid Girl' name was being used elsewhere in the comics field, so I (grudgingly) changed her name to Sephilina the Nauti Girl. She first appeared under that name in Benton Jew's BABES in SPACE anthology in 2004 in a 10 page story called "The Shopping Maul". This was later expanded into a FULL COLOUR Sephilina BOOK.

I really like drawing Sephi and I am thrilled to say that a lot of other people do too. If you would like to see some drawings of her by other artists go to her PINUP gallery.